Following on from my last blog introducing my journey with Talking Mats (TMs), I have described below two examples of my use of TMs in practice. I specialise in working with people who have had sudden onset brain disorders, such as strokes, brain injuries and other progressive brain disorders, such as Parkinson’s disease and dementia. I work in a rehabilitation hospital where we provide a service to the elderly and to a neurological rehabilitation unit.

Talking Mats has been an invaluable picture communication tool to facilitate communication with people who present with cognitive (thinking, memory) and/or communication (talking) skills as described in the examples below:

The first example of TMs shows how it can be used to get to know someone and find out what their hobbies and interests are. 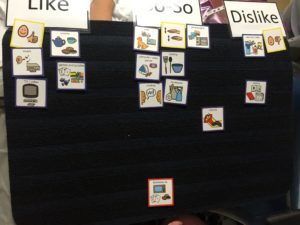 Bob (*name changed) had a large stroke that affected the left side of his brain. This affected his thinking and talking skills. It also affected his walking and he was using a wheelchair in hospital. Bob found it difficult to engage in conversation. The Physiotherapist and I thought that TMs may be a way to help Bob tell us about himself. We also wanted to see how he responded to using TMs to see if this would help him to think about some goals.

We started with symbols that Bob would find easiest to understand, so we explored Bob’s hobbies. The topic we picked was ‘indoor hobbies’ – this was placed at the bottom of the mat. We asked Bob how he felt about different indoor hobbies encouraging Bob to place the pictures on the mat. Using a visual scale of like/so-so/dislike at the top of the mat, Bob told us he liked music, TV, snacks, and card games. He disliked reading, arts and crafts. He felt ‘so-so’ about pets, computers, chatting, cleaning, cooking, photographs, and relaxing. Using the information in his ‘All about me’ book filled out by his family and talking to Bob more about his likes, in particular music and TV, I was able to incorporate his music choices in our music group. Bob became very vocal in the music group, happily singing away to his favourite band! Bob enjoyed TMs and it was used successfully to help Bob set his goals. The picture symbols also helped Bob’s thinking, understanding and talking. The visual framework of his hobbies allowed him time to think, process and respond. 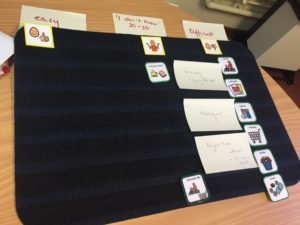 This is Ruby’s Talking Mat:
Topic: Management of domestic life
Ruby (*name changed), a 92 year old, was admitted to hospital with dementia following a fall resulting in a fractured hip. She lived on her own with some help from carers. As a result of her dementia, her thinking and memory were affected. The dementia also caused her to muddle her words and she would talk about her pet ‘penguin’ meaning her ‘parrot’.

The hospital team were worried that Ruby may not manage at home on discharge from hospital and that she may not fully understand the risks if she chose to go home. The Occupational Therapist and I used TMs with Ruby to look at how she felt about managing her self-care and domestic life at home. Ruby was engaged in TMs, but it became apparent that her insight and awareness was impaired. For example, Ruby forgot she had carers to visit her and that her meals were prepared for her by the carers. The hospital team were also concerned about Ruby during the night as she needed help in the hospital to get to the toilet and she would not be able to do this without help at home.

The Social Worker and I worked together with Ruby using TMs to look at her capacity to make an informed choice about her discharge destination. According to the Mental Capacity Act, “individuals must be given help to make a decision themselves. This might include, for example, providing the person with information in a format that is easier for them to understand”.

We carried out TMs as shown in the picture above. The topic, ‘domestic life’, was placed at the bottom of the mat. The top scale at the top of the mat, ‘easy’ was placed in the left hand corner; ‘so-so’ in the middle and ‘difficult’ in the top right hand corner. Ruby felt that cooking, paying her bills, cleaning, shopping, laundry and money were difficult. She felt unsure about being able to make a snack and there was nothing she found easy. When we asked her if she wanted to add anything else to her mat, she said that she was worried about ‘somebody ringing the bell’; ‘falling over’; night-time – ‘being alone’.

The Social Worker and I carried out a ‘sub-mat’ to explore with Ruby other options regarding discharge from hospital. It was felt, given the level of her care needs in hospital, that a nursing home might be the safest option. 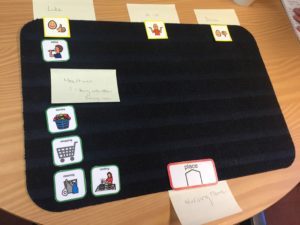 Sub-mat exploring discharge destination options including nursing home:
Topic: Nursing home positives and negatives
The topic placed at the bottom of the mat was ‘nursing home’. The symbol options on the previous mat that Ruby felt were ‘difficult’ were used for the sub-mat. The top scale for this mat was ‘like’, in the top left hand corner, ‘so-so’ placed in the top middle and ‘dislike’ in the top right hand corner of the mat.

Ruby put the ‘eating’ symbol under ‘like’ as it meant to her that her meals would be provided and that she would be eating with others at mealtimes if she chose to. She liked that her laundry would be done for her, and she liked the fact that she would not have to worry about the shopping, cleaning and cooking, as this would all be taken care of by the nursing home. We discussed the concerns that she had about people ringing the bell at home and that she would not be alone at night time.

We gave Ruby a copy of her TM so that she could think about what we had discussed together. A few days later, Ruby called over the SLT and Social Worker on separate occasions when sitting in the ward dining room and said she was keen to ‘get going and look at nursing homes’. I felt that the visual framework of TMs had helped support her thinking, memory and understanding. It gave Ruby ‘thinking space’ to add her concerns of ‘someone ringing the bell’, and ‘being alone’ at night. The mats showed Ruby’s problem solving, such as her difficulties at home versus the benefits of a nursing home. The Social Worker and I felt that Ruby had capacity to make an informed decision regarding where she wanted to be discharged to from hospital. I am pleased to say that Ruby was very happily ensconced in a nursing home chosen by herself and her family. 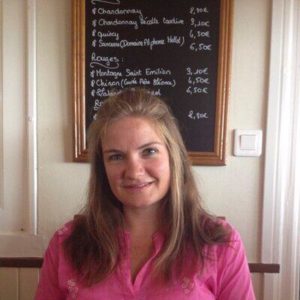 For more information about this blog and foundation training (TMs beginners) please contact me via:
Email: leilapaxton@hotmail.com
Twitter: @leilapaxton