I am a British Sign Language/English Interpreter who has been offering Professional Supervision since gaining a Diploma in Supervision in 2016. In August 2021, a tweet by @_intandem, describing an Advanced Programme of supervision workshops, caught my eye. I was keen to develop my creative practice and here was intandem offering a day’s training focussing on working creatively. After completing their (invaluable) Foundation Supervision Training series, I attended the ‘Working Creatively’ training session in March 2022, led by Sam Simpson. This blog describes my learning from that workshop by outlining its application to my practice.

I had already been using creative play in my supervision sessions, utilising a variety of different media. Previous intandem workshops had contributed to my confidence in this area, as several of their activities had included the use images or objects. However, I felt that the shift to online supervision during lockdown had made using creative tools more challenging. The ‘Working Creatively’ day proved that this was not the case. Sam guided course attendees through a series of creative exercises and activities, which not only allowed us to explore our own creativity but also helped us realise that remote platforms do not have to be a barrier to more playful ways of working with supervisees. Sam outlined many different creative techniques during the training, but I particularly liked the idea of inviting supervisees to choose objects and/or images from their home or workplace to represent what was happening for them in their situation. I had previously considered doing this but my own lack of experience and a concern about possible resistance from supervisees had held me back. Luckily, two weeks after the workshop, a supervisee presented an issue which I felt would be ideal for this type of creative exercise, and it is this experience that I would like to share with you.

The supervisee began the session by describing their feelings of anger and stress following a home visit[1]. Talking through the incident, they told me that they felt as though their personal space and boundaries had been violated, indicating they had strong feelings about what had happened. I suggested that applying a creative lens to their situation might reveal deeper insights about the source of their feelings. I would stress here that the supervisee was invited to engage in a creative exercise because I felt it would bring to the surface aspects we might not reach by using words. There was no obligation for them to undertake the activity, but they readily agreed, and I asked them to select items from their surroundings to represent the four people involved in the visit. They selected the items shown in the image below; a ‘no entry’ sign (the supervisee), a sweetcorn skewer (client), a set of keys (client’s partner) and an electric candle (visiting official). 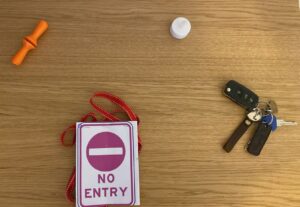 For me, with creative supervision there is always the ‘heart in the mouth’ moment. Whilst I can reassure myself to ‘trust in the process’, my self-doubt is often whispering ‘what if they don’t get anything out of it!’, ‘what if you can’t suggest anything helpful?’. However, the key take-aways from the intandem session stuck with me, and I was able to let things happen organically whilst being honest with the supervisee, e.g., sharing that I wasn’t sure what would happen either, and that there wasn’t a right or wrong outcome.

Despite my fears, the supervisee immediately made several insightful observations. They commented that the ‘no entry’ sign was the line that protects them, noting that the sign and the coloured ribbon were larger than the other selected objects. To the supervisee this difference in size represented the significance of their role in the event. From the layout, they identified that the client was blocking their exit from the room, which revealed concerns about safety. The supervisee also commented on their choice of the electric candle for the visiting official, noting that they felt this individual was bringing light and hope to the situation.

As we examined the objects, I held in mind Sam’s advice to be descriptive rather than interpretative when commenting on the supervisee’s choices. This is always hard for me, but I shared my observation that the ribbon on the ‘no entry’ sign appeared tangled and was obscured by the sign. This led the supervisee to reflect on the clarity of their boundaries, and in the second image shown below, where they were invited to make any changes to their scenario, you can see that they chose to straighten out the ribbon and use it as a boundary or demarcation line. 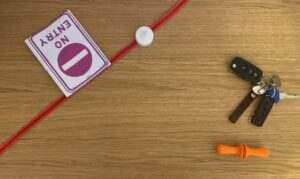 Once the supervisee had repositioned their objects, I asked them to consider the outcome of the activity. As already mentioned, they had strengthened their understanding of their boundaries, and this helped them realise why they had such a strong reaction to the situation. The choice of the sweetcorn skewer to represent the client led the supervisee to reflect on the client’s need for connection, and enabled them to appreciate the frustration behind the client’s actions. The supervisee also felt confident about suggesting a different seating arrangement at a future event of this nature, with all participants located around a table, which could create a formal physical boundary.

Throughout the creative activity I felt guided and supported by the wisdom, tips, and suggestions shared by both Sam and by my colleagues on the Working Creatively course. I remembered to monitor the time and ensure that the activity ended with sufficient space for the supervisee to reflect on their learning. I invited them to record the activity by photographing it. I utilised the words and phrases that had been suggested, adapting them to suit my supervisory style. Above all, I was able to practice really being ‘with’ the supervisee, remaining invitational and enjoying the process as it unfolded. I allowed them to discover their own meaning, rather than imposing mine. The magical alchemy of creative supervision worked, and I feel inspired to offer it again, to other supervisees, in the future. 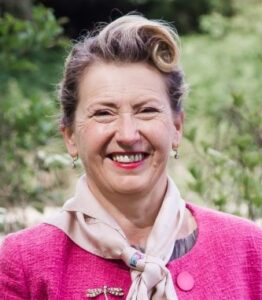 [1] This scenario has been changed and anonymised and is shared with the permission of the supervisee.